With all the attention to what is coming to be seen as a drug epidemic in this country, it is easy to lose sight of an even greater problem with a legal drug we take for granted. That drug is alcohol. Each year, alcohol causes nearly double the deaths of drug overdoses.

CDC Fact Sheets – Alcohol Use and Your Health 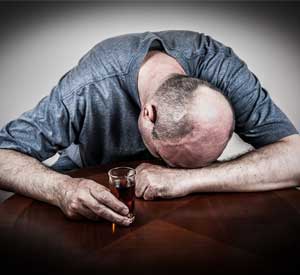 While many illicit drugs grab the headlines, alcohol continues to be our nation’s primary drug of choice and source of many problems. It is an interesting drug because for roughly 85-90 percent of the population it does not seem to cause problems. And it is safe to assume that 100% of the people who drink alcohol do not intend for it to cause problems for them. Yet perhaps as many as 40-45 million Americans suffer from alcohol problems.

One of the most common means of identifying an alcohol problem is by identifying other kinds of problems that seemed to be related to one’s drinking. Things like school or job problems, legal problems, financial problems, health problems, emotional problems, and family problems can all be indicators of an alcohol problem if they are related to drinking. These are often the symptoms we recognize to begin to diagnose alcoholism. Of course, some drinkers are able to drink without experiencing obvious external problems. Other commonly accepted symptoms include craving, loss of control, tolerance and withdrawal symptoms.

There is a simple way to self-diagnose if you have ever questioned whether your drinking or that of a loved one is getting to be a problem. Answer the following four questions honestly.

If you have discovered that you may have an alcohol problem, does this mean that you are an alcoholic? Not necessarily. Many people may experience drinking problems at difficult, perhaps stressful times in their lives. What separates the alcoholic from the problem drinker is that the alcoholic will continue to drink despite the problems that drinking is causing, often unable to recognize that life’s problems are not driving him to drink, but that his or her drinking is causing life’s problems.

Remember that no one begins drinking with the intention of experiencing problems. And no one simply crosses an imaginary line one day and goes from a normal social drinker to an alcoholic. It is important to recognize that alcoholism is a progressive illness with identifiable stages. The progression is often subtle. In Alcoholics Anonymous, the illness is referred to as being “cunning, baffling and powerful.”

So just what is Alcohol Rehab?

There are four essential tasks of any good outpatient alcohol rehab (treatment) program:

Many people make the mistake as simply viewing the “problem” as excessive drinking and the “solution” as either controlled drinking or stopping drinking. By the time you are considering rehab, experiments with controlled drinking have probably already failed. While stopping drinking is key to the recovery process, the disease of alcoholism is much more complicated than that. A good rehab program will help you understand that drinking has become your solution, your way of coping with life, and that the real problem is your lack of other coping skills.

Whether or not there is such a thing as the “Alcoholic Personality,” is subject to debate. What cannot be overlooked, however, are the common behavior characteristics of those suffering from alcoholism/addiction. These common traits are the source of mutual identification in 12-Step meetings and also help to define the disease beyond simply the abuse of alcohol or other drugs. It is these characteristics that suggest that recovery is more than simple abstinence. Most of those with a substance use disorder will identify many of these in themselves:

You probably will not identify all of these characteristics in yourself, but chances are that you will recognize many of them as aspects of your personality. The job of a good rehab, then, is to help you begin to address these issues in a climate of sobriety.

There are many levels of care that are often referred to as “rehab.” Each is distinct, with separate goals. Each is part of a continuum of treatment. You may or may not require help at each of these levels of care:

Medical Detoxification
The abuse of many substances creates a physical dependence that requires medical attention to safely withdraw from the drugs. This is most often done in a hospital setting under a doctor’s care and with 24-hour nursing care. It can sometimes be done in what is called a “social model” setting or on an outpatient basis under a doctor’s supervision of prescribed medication. The substances that most often require medical detoxification are alcohol, benzodiazepines, and opiate pain medications, including heroin. Alcohol withdrawal can be life-threatening.

Residential Treatment
Residential treatment is a “live-in” option that is what most people probably think of when they consider “rehab.” Residential treatment generally is from 30 to 90 days. It offers a safe environment, away from everyday stressors, where one can focus solely on their recovery, get emotionally and physically stabilized, and be introduced to basic recovery concepts. Residential treatment varies greatly in terms of amenities and therapies offered, from “bare bones” to quite luxurious.

Outpatient Treatment
Outpatient treatment is designed for those who are somewhat more stabilized and have the ability to stay sober between sessions. It is a level of care designed for people who cannot take time away from work or family to go to residential treatment. It is also used as a step-down from residential programs. Outpatient treatment is typically three to four 3-hour sessions weekly (Intensive Outpatient), but may also be five 6-hour sessions weekly (Partial Hospitalization). The benefits of outpatient treatment are extended length of stay and the practical application of recovery tools in a real life environment.

Continuing Care
Sometimes called Aftercare, Continuing Care is a less structured environment designed to sustain recovery by continued involvement in either a group setting or individual therapy. The focus is on issues in early recovery and relapse prevention. This is often part of either a residential or outpatient program, or may also include individual therapy and community support groups like AA or NA.

An ideal treatment episode might include medical detoxification (if necessary) followed by residential treatment and a transition to outpatient treatment. The National Institute on Drug Abuse (NIDA) recommends a minimum of 90 days of treatment. Recent studies indicate that it often takes from one to one and a half years for the brain to heal, which coincides with old AA wisdom that recommends no major decisions in the first year of sobriety. The good news is that treatment works, and that addiction is probably the most treatable illness there is.

Call now for your free assessment!